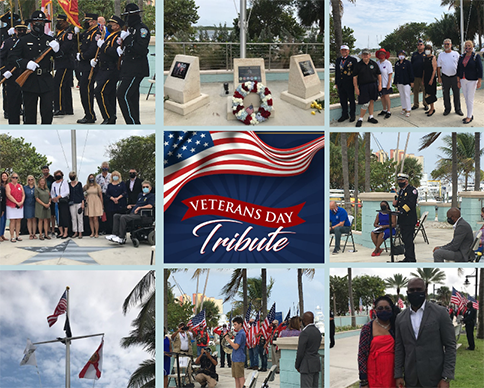 The Posting of Flags was done by the Riviera Beach Honor Guard, Mayor Ronnie L. Felder, City of Riviera Beach, gave the invocation, and State Senator Bobby Powell, Jr. and Palm Beach County Commissioner Mack Bernard dedicated the State of Florida flag and City of Riviera Beach flag during the ceremony. Taps was played by Nathan Goldin, a student from The Alexander W. Dreyfoos School of the Arts and a musical tribute was performed by Faith’s Place Center for Arts and Education. Commissioner KaShamba Miller-Anderson was the Mistress of Ceremonies for the event.

“This project has been one that I have been very passionate about in making sure we honor the veterans, Gold Star families, and our first responders in Riviera Beach. As the Gold Star daughter of Captain Joseph M. Berkson, US Army Ranger, who paid the ultimate sacrifice in Vietnam, I am grateful to have built a relationship with so many of our military heroes,” said Lauren Berkson Hurst.

Veterans Day as we know it was not always called “Veterans Day.” It began as a commemoration of Armistice Day, the day when fighting stopped during World War I. On June 1, 1954, November 11th became a day to honor American veterans of all wars. Later that year, President Dwight D. Eisenhower issued the first “Veterans Day Proclamation.”

Mayor Ronnie Felder from the City of Riviera Beach expressed his appreciation by saying, “To the men and women in uniform serving today and those who have served in the past, as the Mayor of the City of Riviera Beach, I express my appreciation for your service. We honor you today and every day. Our freedom and way of life is protected because of the critical service and heroism provided by our Veterans, First Responders, and Gold Star Members to our country and city. There is no way to thank you for everything you sacrifice for this but we have to try. So I take this opportunity, as we all should, to thank you all for your service both past and present.”

Gold Star families are those loved ones that paid the ultimate sacrifice for our freedom while serving in the United States military. Our first responders within our community work diligently every day to serve and protect our citizens and keep us safe at their own risk. We applaud and pay tribute to the sacrifices of these brave men and women and their families.

The Riviera Beach Community Redevelopment Agency is at the heart of dramatic transformations underway within the district. Formed in 1984 by the Riviera Beach City Council, the Riviera Beach CRA provides funding for a wide scope of projects that incentivize economic growth through business attraction and retention; finances and new and improved infrastructure for real estate projects; and generally works to expand the tax base by creating a welcoming environment that eliminates blight and improves the perception of safety in the area.

The Agency’s main mission is to guide the city’s redevelopment efforts. This includes making investments of public funds in key infrastructure improvement projects that have the capacity to act as a catalyst for additional private funding and development, create jobs and help to improve the quality of life for city residents. For more information about the Riviera Beach Community Redevelopment Agency, follow the official Facebook, Instagram @RBCRA and Twitter @RivieraBeachCRA pages or visit www.rbcra.com.

Posted in In The News, Press Releases and tagged veterans day.