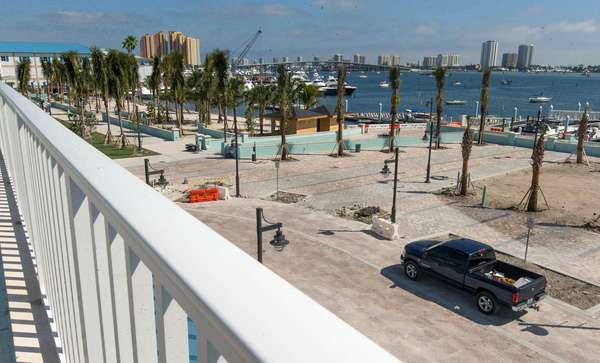 The marine-centric past and present remains the focus as city officials hope to raise Riviera Beach’s profile with its new Marina Event Center, scheduled to open in May. It’s a key cornerstone for revitalization in a city with a high share of low income neighborhoods juxtaposed against wealthy Singer Island.

Riviera Beach’s new Marina Event Center, park set to open in May photo
The two-story sea-foam blue state-of-the-art facility with large and small banquet and meeting rooms overlooks the Intracoastal Waterway and the bustling 111-slip marina. Located at the foot of East 13th Street south of Blue Heron Boulevard, the 36,488-square-foot building will also eventually include a two-story restaurant, cafe and the first-ever display of Riviera Beach’s history.

“We feel we have the best waterfront property in the county,” Tony Brown, executive director, Riviera Beach Community Redevelopment Agency said while standing on the expansive promenade, four feet above the docks. “What has made it popular is that you can get this close to the water.”

It’s a waterfront packed with the excitement of watching recreational boats and yachts, Peanut Island, the Blue Heron Bridge to the north, and cruise ships and other large ocean-going commercial vessels at the Port of Palm Beach to the south.

The $35 million project, funded two-thirds by the CRA and one-third by the city, is a complete re-do of the property, Brown said. The event center, with its high-end finishes, beige tile floors with multi-colored decorative inserts, a stairway with glass panels and a cupola with a lighted contemporary sculpture and skylights, is the showy centerpiece of the property officially known as the Riviera Beach Marina Village.

“Riviera Beach Marina Village is a testament to the progress being made in our city,” said Riviera Beach Council and CRA Board Chair Dawn Pardo. “It will change perceptions about Riviera Beach, and give people a new reason to visit our waterfront.”

Last week the city cuncil approved a three-year contract with Loggerhead Marina, a subsidiary of Seven Kings Holdings, to operate the marina.

The CRA plans to issue a request for proposals in the next few months from private developers for projects on CRA-owned property.

In December the CRA cuts its ties with Viking Developers, which in 2006 was selected as master developer for the mixed-use project. Viking wanted to bow out after it disagreed with the CRA on issues such as leasing, parking, land swaps, timing and building height.

However, recently Viking and the CRA swapped some land so the CRA can provide surface parking at the site. The CRA is also leasing the former Yachtsman motel site from Viking for parking.

In addition to the restaurant and cafe anticipated inside the event center, plans call for five restaurants to occupy a “Restaurant Row” facing the waterfront.

The center’s 4,800-square-foot ballroom, named Newcomb Hall after the demolished previous one-story facility built in 1959 will be available for events for $2,000 for eight hours to non-residents. A wedding is already booked in May, as well as approximately 70 other events and meetings through 2017, said Mark Blomeke, marina facilities operations manager. He previously worked as director of audio visual services and as a conference manager at The Breakers, Palm Beach.

Wednesday, several dozen workers were putting the finishing touches on the event center and grounds. A Bobcat outfitted with a wide broom was being used to push gravel between the pavers on the promenade.

Some of the 700-plus trees, including Medjool and Royal palms, were being installed. At Bicentennial Park, 24,000-square-feet of hardy Bermuda grass is in place in anticipation of upcoming concerts and other events. Surveillance cameras and wi-fi will also be operating throughout the property, which will have 24-hour security patrols, Blomeke said.

The park will feature a children’s splash park with 42 water jets — 40 of them with lights — shade sails, restrooms and eventually, a concessions stand. There’s even a half-acre sandy beach designed for “family fun” with kayaks, jet skis and other water craft available for rent.

Mark Lucier, general superintendent of Sanford-based Freeport Fountains, said his company has installed splash parks all over the country, including those at Disney World and the Palm Beach Zoo in West Palm Beach. The jets at the Riviera Beach park will shoot five and a half feet into the air. The water will be filtered and recycled and can also be heated. The computerized system can be controlled via a laptop.

Surface parking will be free, but in years to come, once a garage is built, there will be parking fees.

The 23-acre site’s development is expected to take about 10 years. Viking officials have said they expect to develop rental apartments or condominiums on land the company owns along Broadway. There are also plans for a marine business office building and a hotel.

The vision begun with Montreal-based consultant LiveWorkLearnPlay’s advice that the waterfront must be re-done correctly or that Viking’s land would become worthless, is being carried forward today, Brown said.

The marina is intended to be a catalyst for the redevelopment of the Broadway corridor.

“We wanted to create a great project and work on re-branding our image,” Brown said.

Posted in In The News.