RIVIERA BEACH — Demolition began this week on the last piece of the rebirth of Riviera Beach’s Ocean Mall.

Redevelopment of the city-owned mall on Singer Island’s oceanfront has stalled for years amid foreclosure and lawsuits. 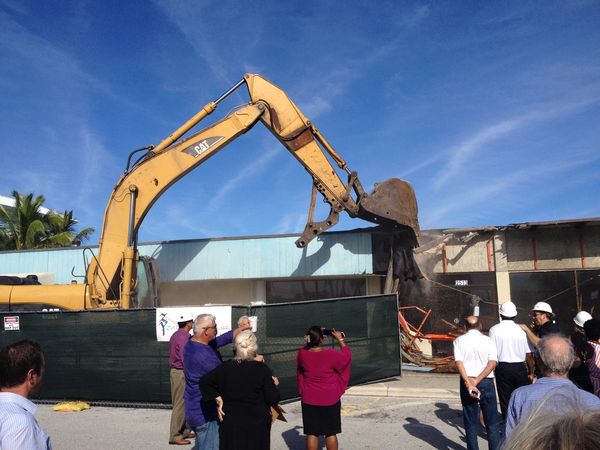 Demolition began Thursday on the last piece of the redevelopment of the at Ocean Mall on Singer Island in Riviera Beach. (photo contributed)

A handful of restaurants and retailers are operating at the mall now including a busy bar and restaurant, a sandwich shop and a watersports store.

After years of delays, new Ocean Mall developer Zvi Schwarzman has plans to build a restaurant-retail space in place of the aging building that formerly housed a 7-Eleven.

Under the agreement with Schwarzman, the city retains ownership of the land and the building is subject to a long-term lease.

“It’s very similar to what has been built with the difference being that there will be a balcony facing the ocean,” said Scott Evans, planning and development director for Riviera Beach’s CRA.

Ocean Mall redevelopment had been a lightning rod for criticism. Angry residents signed petitions in 2006 to repeal a city council vote giving the go-ahead on an ambitious plan: a 99-year lease and a privately financed 28-story hotel and condo complex, as well as the retail space.

Eventually, both measures went on a ballot, and voters ushered in plans for no more than a 50-year lease and a height limit of five stories.

Source: http://www.palmbeachpost.com/news/business/a-new-chapter-for-riviera-beachs-ocean-mall/nbGFj/
Posted in In The News.